kamagra gel 100 mgIt would be easy to write about the summer holidays of my youth. If I described in a lightly critical way my family’s week-long excursions to the Isle of Wight, Eastbourne, Bournemouth, Westward Ho! and so on, many other pre-package holiday children of the sixties might recall with sympathy, similar experiences of bittersweet misery. I could write about the smell which greeted us every time we woke at whatever one-star B&B we found ourselves in that summer, a smell which could only have been made from the marriage of scorched tea towels and boiled eggs. I could continue in that vein, blandly reflecting on the general awfulness of these faded resorts, magnified tenfold on a rainy day, and whine about how they managed to get away with making fools of us, year after year. This also might strike a chord.

Elaborating on these whipped-up-in-a-trice kinds of memories is simple. I could easily describe the tawdry Victorian snootiness of the classic seaside B&B of that time and its tendency to bring out the worst kind of belligerent fussiness in holidaymakers. Details like waddling crowds, screaming babies and lobster sunburn would add to the effect. My finished product would be almost televisual, a little stage for soap-opera dramas. It would also be fundamentally dishonest, a mishmash of Graham Greene, saucy Donald McGill postcards and The Two Ronnies. It’s even easier though if I start making it up, cut corners, paint in broad strokes, come up with a few caricatures, follow it with a few other interventions.

buy levitra in usaThe default version of my generation’s seaside holidays seems to crawl out from a kind of injured sentimentality, too long in the company of that fantasizer of the past, nostalgia. Our remembrance of these times made for us to enjoy, holidays, for instance, is complex. I could write that it always rained in Bournemouth, but did it or is it just easier to rely on the seemingly bottomless jaded eye? None of us seems to thrive in spaces made from what other people think we want, so family holidays were always likely to be fertile ground for third-degree childhood trauma, albeit of a privileged, First World kind. These were the experiences that later emerged as memories layered and fragile as puff pastry.

The easy way denies the ‘Seaside’ beside the sea, that place where, on the one hand, you could drink milkshakes and be sick, and tickle sea anemones and hermit crabs and walk down a shaky pier into the mist and stay in a funny-smelling place that was not home, and on the other you could contemplate the roiling primal chaos of the sea with its ebbs and flows and undertows. The Seaside of my time was all about minutiae and mild bodily discomforts.

buy authentic levitraWriting with ease is understandable. It’s away to avoid engaging with past real experience which is often strange and floating free outside narrative. Avoidance is also simple in a comfortable way. But when we write like this we don’t look back into the pell-mell of our own memories but simply use whatever materials are lying by the side of someone else’s road.

Writing about what my summer holidays were really like is hard. All around is ambiguity. My parents fought a slow war of rhetoric and sanctions, all witnessed by my sister and I. We listened, perhaps playing with the sand between our toes, or maybe we just waited for something better to happen. Everything was coloured by this war. I was just moving into an age when having friends was vital but I had none, nor a girlfriend. Seeing groups of fun-loving early teens made me more deeply depressed than I can describe. 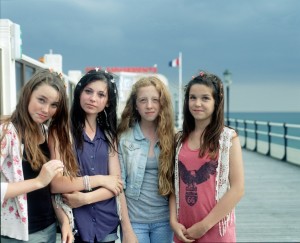 Still, putting this aside, and nostalgia too, some seaside holidays I remember as magical, the kind of times you look back on when it feels like you never ever had any good times. Before the parent war started, we had a week on the Isle of Wight. It was a little, unimpressive destination but we were a little family and it was fine for us. Everything was new and glittering, from the ferry and the gas flares at the Fawley refinery, to the fairy lights and attractions at Blackgang and Shanklin chines. Every night we would go to the same place and drink Horlicks with frothed milk, which made us feel cosy as we watched the wan light weakly reaching out from St. Catherine’s Point. The orange surfboards we would rent kept us amused for hours, scuffing up the sand as we flew into shore. These were happy times, more poignant because the world they came from disintegrated soon after into painful wounds beneath the skin.

The lazy way to write about my holidays would be to blame the usual awfulness on a tawdry “Kiss Me Quik” version of the Seaside. My more considered, revisionist view is to blame no-one but to acknowledge that recalling our summer breaks would also be to recollect the two adults who built our holidays for us, even as their own structure was beginning to crack apart. 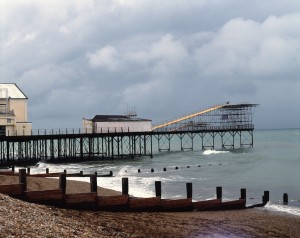 So the easy way produces fundamentally dishonest writing. Authentic work that honours the excruciating complexity of experience and memory with all its contradictions and paradoxes is never satisfactorily complete. Painting the seaside front and the promenade only, though attractively lurid and grotesque, is to ignore the fine details, the urgent necessity for paper doilies in guest houses, for example, and settle for the collected cynicism of the sixties’ generation.. Not pulling on this venerated store of scorn, and instead, writing alone is shocking because it becomes difficult to say anything that is our own. It is apologetically that I intone the banal dictum that our defaults and memories are becoming more and more colonized by information that is mass-produced. If we absorb these messages, then our writing style, language and priorities succumb to the easy way. We need to hold on to and learn from and write about our difficult, unresolvable, and painfully exquisite experiences.

Now in my mid-fifties, I find I enjoy going to Brighton Beach. I love everything about it, from the front, to the rollerbladers, to all the beautiful bodies and tea shops, and, of course, the sea. And when I’m there, I don’t think about anything very much and certainly not writing. I just listen to the sea. I listen to it, not as it it’s written about with someone else’s words. I just listen.